Textile Center’s facility features fiber art galleries with rotating exhibitions, an artisan shop which supports working artists, a 300-seat auditorium, classrooms, and the Textile Center Pat O’Connor Library, one of the nation’s largest circulating textile libraries open to the public. Also included is the Ellen Erede Wells Dye Lab, the natural dye plant garden A Garden to Dye For, and staff offices. The flagship exhibition space, the Joan Mondale Gallery, is named after Joan “Joan of Art” Mondale. The wife of Vice President Walter Mondale was a major proponent of craft as art, and her and her family’s support was critical to Textile Center becoming the national center for fiber art that it is today!

How Textile Center Came to Be

Textile Center is unique as a national center for fiber art. Fiber artists and visionary arts patrons started the organization, which was incorporated as a nonprofit in 1994. Before Textile Center was founded, local artists and guilds operated in isolation and faced limited opportunities to exhibit work, expand participation, or pursue advanced training. Textile Center’s first decade drew disparate groups into a coalition and answered fiber artists’ need for space to meet, exhibit, teach, and learn. Instrumental in this effort was one of the founders of Textile Center: Margaret Miller – the organization’s executive director for its first 18 years of existence. 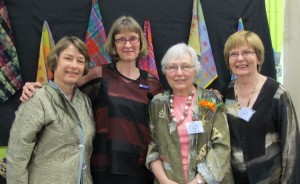 During its first seven years Textile Center operated from an office in St. Paul and it presented three or four annual fiber art exhibitions in venues across the region. At the same time, Textile Center founders were building connections among textile guilds, fiber artists, and textile arts enthusiasts–and they began an extensive search for a permanent home. In 2000, Textile Center found a 1920s one-story brick building in the Prospect Park neighborhood of Minneapolis, and a capital campaign was launched to pay for the purchase and renovation of this building.

Textile Center surpassed its $2 million capital campaign goal in early 2003, thanks to phenomenal grassroots support from more than 1,300 individuals and scores of textile guilds, businesses, and foundations. Rapson Architects designed the renovation of the building, originally a Ford auto showroom, and uncovered many of the building’s original features including clerestory windows, terrazzo floors and trusses that had been hidden for years. The renovated facility opened in 2001, which led to a dramatic expansion of Textile Center programs and services. The founders’ desire for a gathering place where textiles could be celebrated—not just for their practicality, but also for their beauty as an art form—was finally realized.

Textiles have always played a social role in bonding families and communities; contributed to spiritual and sacred traditions; been important to world trade; and provided a rich expressive medium for craftsmen and artists, including outstanding contemporary artists. Fiber art encompasses a wide range of forms, both creative and crafted, including weaving, quilting, knitting, sewing, dyeing, felting, needlework, lace making, basketry, beading, hand-constructed sculpture, installation and multimedia work. It’s a universal form, and ancient examples survive in places as disparate as Egypt, China, and Peru. Historically an under appreciated, female, art form (the term “spinster” comes from women and girls who spun wool), The National Museum of Women in the Arts reports that since feminist artists have “…brought fiber art into the Western mainstream in the 1960s and ’70s, textiles have become central to contemporary artistic practice worldwide.” 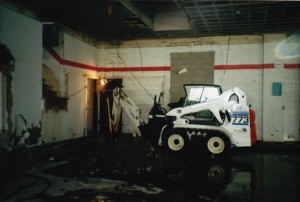 Textile Center is located in the heart of the new Towerside Innovation District, which extends from the University of Minnesota Twin Cities campus east into St. Paul. Towerside is “the only duly designated innovation district in the Twin Cities with the intent to mix entrepreneurs, residents, researchers, developers and businesses with a new, restorative, healthy and arts-inspired community.” As the only center of its kind in the region, Textile Center contributes to this goal.

Anchor tenants include the Weavers Guild of Minnesota and 30 member guild organizations that use the Center’s space for meetings and events throughout the year. Textile Center programs more than 200 classes a year for all skill-levels and year-round youth programming which includes the Youth Fiber Art Guild™. Patrons flock from around the region to attend the annual World’s Largest Textile Garage Sale, in which volunteers help repurpose donations of textile materials and sell back to the community at inexpensive prices.

Over 700 artists, member guilds, individual members, students, participants, and neighbors informed the 2016 – 2021 Strategic Plan. The new Strategic Plan lead to an addition to Textile Center’s mission statement, to “honor textile traditions, promote excellence and innovation, and inspire widespread participation in fiber art.” Among the 2017 strategic focuses was addressing how best to improve and enhance Textile Center’s facility to accommodate the need for growth in educational programming, and member guilds’ needs for more classroom, exhibit, meeting, and shop space. Textile Center subsequently engaged one of Minnesota’s most distinguished architects, David Salmela, to lead the planning and design for renovations and possible expansion of Textile Center’s facilities.