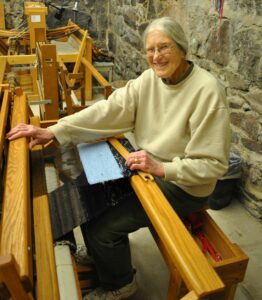 The Janet Meany Collection of the Textile Center Library is an impressive set of 231 loom manuals and instruction books collected over the years by Janet Meany, a Duluth-based textile artist and teacher who co-authored the Rag Rug Handbook in 1988 with Paula Pfaff, one of the founders of Textile Center, and a revised edition was published in 2016.

“This collection is the result of years of research Janet did into the unrecognized history of rag rug weaving,” Paula said. “Over a period of about 40 years Janet focused passionately on the rag rug weavers, their looms, and their rugs. She forged personal relationships all over the country with all kinds of groups who shared interests in these areas. She frequently shared her research with special interest groups, such as owners of vintage looms, historians, and students at conferences.” 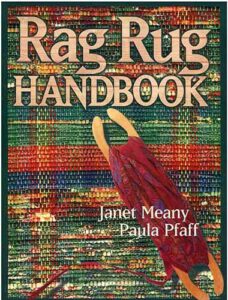 Paula added: “Over time Janet’s enthusiasm and reputation spread and her collection of printed loom materials multiplied to include more than manuals, which sometimes were simple assembly instructions for the loom, including instruction books and loom histories.”

The Janet Meany Collection is currently being digitized under the direction of Textile Center Librarian Nancy Mambi, and once completed, it will be accessible to weavers around the world.

Denise Perry, a long-time friend in Duluth, began working with Janet to organize and index the collection in 2017. “I remember asking Janet how many loom manuals she had collected over the years,” Denise said. Janet’s reply: “Oh, about 200.”

“Janet Meany and I met at the Weavers Guild of Minnesota in 1972, where we were both taking a beginning weaving class from Irene Wood,” Denise said. “During that week we discovered that we both lived on the North Shore about 15 miles apart. Over time, we formed a deep and long-lasting friendship.”

“We are honored that Janet Meany wanted her years of loom research to be part of the Textile Center Library,” Nancy Mambi said. “We are currently scanning 18 notebooks that contain the 231 manuals, some of which are rare and hard to find. Building on Janet and Denise’s work in Duluth, Paula Pfaff and I are organizing the collection so that weavers and researchers will be able to access these manuals through an online catalogue we will be constructing in the year to come.”