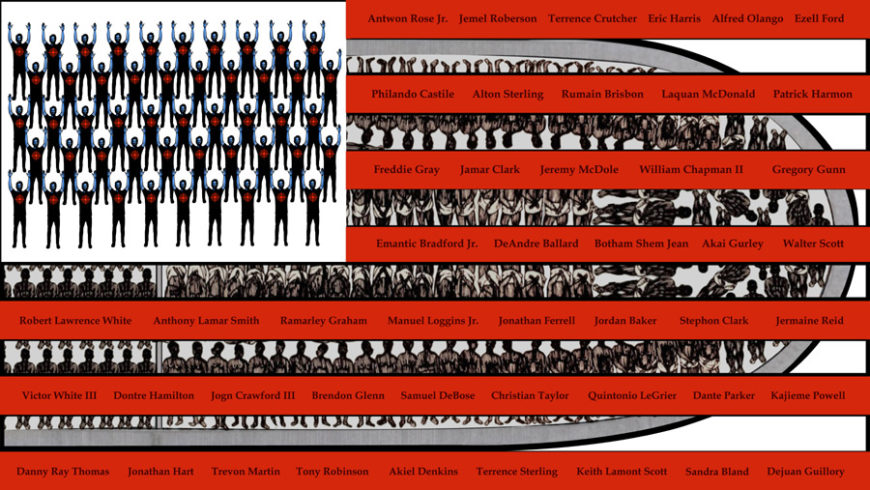 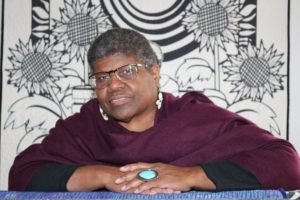 “My life is always in the fast lane, and this pandemic has given me a lot of time for reflection,” says Dr. Carolyn Mazloomi, a nationally acclaimed quilt artist and lecturer who lives near Columbus, Ohio. She has been working on dual tracks: working on her creative pursuits at her home studio, as well as dedicating more time to empower African American quilters to preserve their legacies.

In normal times, Carolyn is crisscrossing the country, in demand as a curator and lecturer. With travel suspended, “this pandemic has forced me to slow down,” Carolyn says, “and I realize how much I miss creating new work in my studio.”

In addition to quilting, writing, and editing, printmaking is among Carolyn’s many artistic endeavors — a medium that allows her to share more widely her stunning quilted subjects on paper. She is also an avid art collector. “I have acquired a lot of paintings, and they need framing,” she says, “so I took a course in framing, set up a woodshop, and now I am using this time to frame nearly 40 of my collected works.”

“My studio is my haven, and when I am in my studio, it’s like I am in another world,” Carolyn says. “Other than being with my family, I am happiest in this environment. My husband calls it my museum. I love to live around all this art. It’s very special to me. It is my sacred space.”

A founding member of Textile Center’s National Artist Advisory Council, Carolyn was the juror for the quilt exhibit “Commemorating His Purple Reign: A Textural Tribute to Prince” in Textile Center’s Joan Mondale Gallery in 2017, and then at the Wisconsin Museum of Quilts and Fiber Arts in 2018. This exhibit featured a number of quilts created by members of the Women of Color Quilters Network (WCQN), which she founded in 1985.

“Because I handle everything for the WCQN — chief administrator, financial officer, curator … basically, I do it all — I am seeing the impact this pandemic is causing,” Carolyn says. “One of our best sources of revenue are the exhibitions we rent to museums across the nation. We have temporarily lost some of exhibits due to museums having to be closed and to adjust their schedules. This affects the women in our network. They are losing the opportunity to sell their work.”

The pandemic, which has claimed two lives of her WCQN members, has also brought greater urgency for Carolyn to “put the final touches on the latest project for WCQN … which is my legacy project. I am working to empower African American quilters to preserve their own legacies. The average age of the quilters in our network is somewhere between 74 and 103, and their quilts are being taken by people outside of their families. As a result, we may never see those quilts again.”

“It’s a disservice to the quilt maker and to African American quilt history,” Carolyn says. “This happens because the quilter doesn’t have knowledge about how to preserve legacy. They don’t know how to document their quilts and how to create wills that document what should happen to their quilts when they die. This is a project I am personally underwriting. I am speaking to quilt makers every day, working with them to preserve and honor their legacies … and to do so for their families and for scholars who will keep these legacies alive.”

Dr. Carolyn Mazloomi has been the recipient of many state and national honors, among them the 2003 Ohio Heritage Fellowship Award, the first such award for any Ohio citizen. In 2014 she was named a National Heritage Fellow by the National Endowment for the Arts, the highest award given in the United States for traditional arts. In 2014 she was awarded the Distinguished Scholar & Celebrated Artist Lifetime Achievement Award by Faith Ringgold’s Anyone Can Fly Foundation. Dr. Mazloomi is the 2016 inductee to the Quilters Hall of Fame Museum. All of her books are available in the Textile Center Library. carolynlmazloomi.com