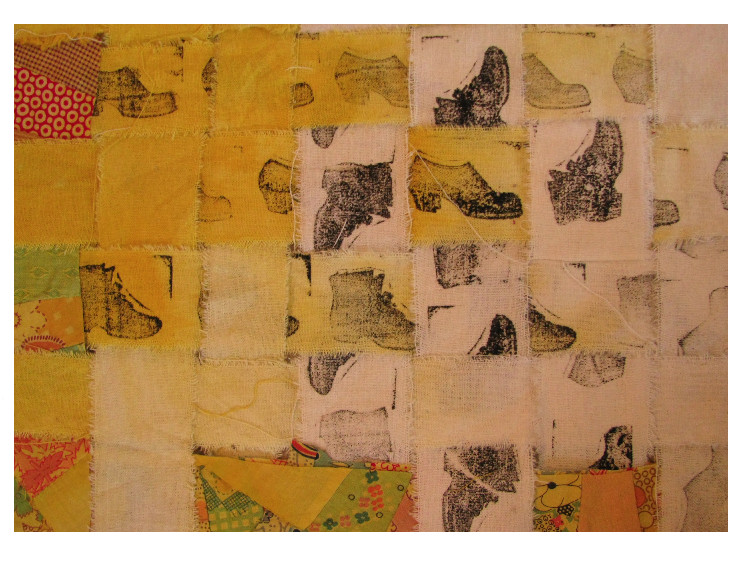 An exhibit by Sonya Berlovitz

Artist Statement
Between the late nineteenth century and the early twentieth century, my grandparents Sophie Golling, Morris Berlovitz, Pearl Yesnes, Himey Haskvitz and his father Abraham, like many Ashkenazi Jews immigrated from various Diaspora communities in Eastern Europe, Prussia, Lithuania, Ukraine, and Romania respectively, and settled in Minnesota. The movement of my ancestors from one continent to another and the impact that transition had on my family has always held a lot of fascination and inspiration for me. Understanding them has helped me understand myself better and at the same time connected me to something larger than myself. Traditional craftsmanship was an important part of my upbringing passed on through several generations to mine. Many of my ancestors worked with their hands. My grandmother, Sophie, knit and crocheted, like many women of her generation. My mother and aunt were both professional seamstresses. I starting sewing at the age of eight and have applied that knowledge to my work as a costume designer for theatre and dance for the past thirty-three years. Each of the pieces in this exhibit forms a visual narrative of my ancestral roots. Hand woven together into landscapes of cloth and imagery, these pieces symbolize a confluence of my ancestral past and present, signify the fragility by which our lives are woven together, and pay tribute to the handwork that was a significant factor in my upbringing and development as an artist. Mapping the multitude of textures and colors that have informed my family’s history, torn edges blur cultural boundaries and represent the haste with which my forefathers left their native countries, leaving behind most of their belongings and only taking with them fragments of their former lives.

Sonya Berlovitz designed costumes for Theatre de la Jeune Lune between 1980 and 2008. She designed over 50 of their productions including Carmen, The Miser, Hamlet, Cosi Fan Tutti, The Magic Flute, Tartuffe, Medea, Circus of Tales, and The Three Musketeers. Other production sites have included The Moving Company, Berkeley Repertory Theatre, Childrens Theatre Company, Guthrie Theatre, American Repertory Theatre, La Jolla Playhouse, Actors Theatre of Louisville, and Playmakers Repertory Theater in 2012. In Minneapolis her designs have been seen at The Jungle Theatre, Theatre Latte Da, The History Theatre, Interact Theatre, and Savage Umbrella, as well as the dance companies, Minnesota Dance Theatre, Arena Dances, and Stuart Pimsler Dance and Theater. She is a graduate of both La Chambre Syndicale de la Couture Parisienne and The School of the Art Institute of Chicago where she studied fashion, painting and textile design. Following her education she worked as a textile specialist for Yohji Yamamoto, international fashion designer, in Tokyo, Japan. A recipient of many grants and awards including The Bay Area Theatre Critics Circle Best Costume Design award, McKnight Theatre Artists Fellowship, a 2013 Minnesota State Arts Board Initiative Grant, a 2011 Sage Award for excellence in dance design, and participation in the juried exhibition World Stage Design in Toronto 2005.