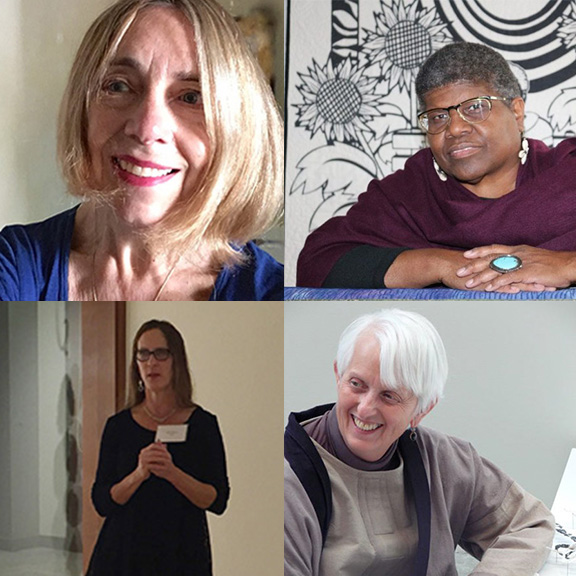 Carolyn Halliday, Chair, member of Textile Center since its inception

Carolyn Halliday, Chair, has been showing her work throughout the nation for nearly two decades, earning a variety of awards. In spring of 2014, she was the featured visual artist for an episode of the televised TPT (Twin Cities PBS) production Minnesota Originals. She was a 2013 recipient of a Minnesota State Arts Board Artist Initiative Grant. Halliday is a featured artist in the book Knitting Art: 150 Innovative Works from 18 Contemporary Artists and in the book How to Be a Feminist Artist: Investigations from the Women’s Art Institute. Her work has also appeared in Surface Design Journal and Interweave Knits.

Actively committed to participating in the Twin Cities arts community, she has been a guest juror at various institutions including the Weisman Art Gallery, past president and former education chair for the Weavers Guild of Minnesota, and a member of a local spinning group, created 25 years ago. For more than a decade, she continues to promote artists’ peer critique by teaching and facilitating the Critical Response mode. Previously the Lead Mentor for the Textile Center Mentor/Protégé Program, she is currently a Mentor in the WARM (Women’s Art Resources of Minnesota) Mentor/Protégé Program and mentors artists privately. She has been employed by the Minneapolis College of Art and Design and was a teaching assistant for the Women’s Art Institute, offered through MCAD and St. Catherine University. Her work is included in the Minnesota Historical Society’s fiber art collection.

From the founding of the African-American Quilt Guild of Los Angles in 1981 to the 1985 founding of the Women of Color Quilters Network (WCQN), Mazloomi has been at the forefront of educating the public about the diversity of interpretation, styles and techniques among African American quilters as well as educating a younger generation of African Americans about their own history through the quilts the WCQN members create.

Mazloomi’s quilts can be found in private collections around the world as well as in distinguished museum collections in the United States. To date she has published nine books highlighting African American-made quilts. Her artistic work, as well as her defense of solid research, has disrupted long-standing myths about African American quilts, myths much debated among quilt historians and quilters alike, and thus moved the conversation about African American quilt history forward to more a solid academic footing.

Krumm is currently the Director for Artistic Advancement at Textile Center, and maintains a studio practice in St. Paul, MN.

“I interpret and express my concerns about our environment and the human condition through my work. I admire the directness and honesty I see in tribal art and I try to incorporate those qualities in my own art. My pieces express both action and reaction to what I have loved in the past and what I am discovering today.” –Mary Giles’ artist statement.

The effervescent Mary Giles became part of our Textile Center’s family in early 2015, when we sought an exhibition of her work to coincide with the National Basketry Organization’s 8th Biennial Conference: Tradition and Innovation VIII, held in Saint Paul, July 14-19, 2015. Mary preferred to not have her work to be limited to basketry, and she considered herself a “fiberist.” When we formed our National Artist Advisory Council in June 2016, Mary was among the first artists we asked to join a distinguished cohort of artists – including Carolyn Halliday, Dr. Carolyn Mazloomi, Pat Hickman, and Tracy Krumm – to serve as advisors and advocates for Textile Center and to help take our organization to new artistic heights.

Up until her final days, Mary shared an exciting vision for all Textile Center can and will become, and Carolyn Halliday and I had the privilege to meet with her one last time in late March. Mary said of Textile Center that afternoon, “You are my people.”